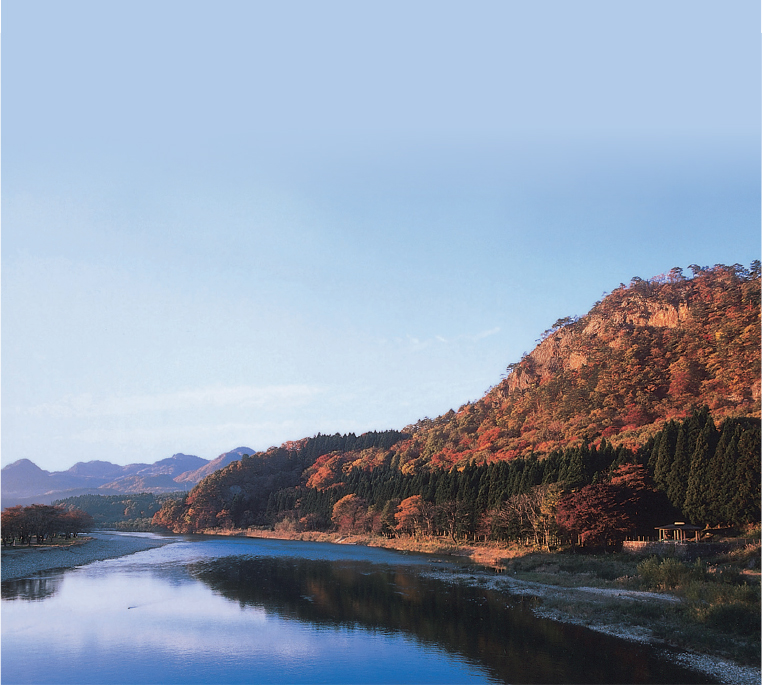 Kirinzan is a sake maker with more than 170 years of history.
We are located in the town of Aga,
in Niigata Prefecture - the snowy center of
Japan’s finest rice-producing and sake-producing region situated
300 kilometers north-northwest of Tokyo.
Our motto is ‘Brand sake begins with individuals working in harmony’.
We produce fine sake made with 100% local ingredients
with the goal of contributing to the richness of our customers’ lives.
This is the sole desire of Kirinzan Brewery.

Born and raised in the town of Aga in Niigata Prefecture, the CEO of Kirinzan Brewery first began his career at an old shop advertising company in Tokyo after he graduated a university. For 5 years, he was involved in promoting a variety of companies and through this experience he learned state-of-the-art marketing skills. In 1995, he decided to continue the family business and entered into Kirinzan Brewery as the CEO of the company.

Referring to himself as an ‘athletic brewer’, the CEO loves golf, skiing, and marathon. He is the happy father of 3 daughters, and always finds time in his busy schedule to enjoy with his family. He enjoys eating and drinking and always jumps to the occasion to eat and drink with friends and employees at any establishment that provides good food.

1843 (Tempo 14)
Starting out as a producer and seller of charcoal, Kichizaemon Saito became the founding father of the brewery. He chose the Japanese characters for blessing “福” and well “井” to signify the rich waters that spouted from his well and the blessings of the gods to name his brand “福の井” (Fukunoi).

Since no records remain, it is impossible to know the exact year
(although estimates have been made using the Japanese year naming system),
but during the 4th generation of the business, Tokuhei Saito abandoned the charcoal branch of the business and began to focus solely on the production of sake. At that time, the brand’s name was changed from Fukunoi to Kirinzan.

1951 (Showa 26)
Tokuo Saito, the 5th generation CEO of the brewery, incorporated the company and changed its name from ‘Saito Brewery’ to ‘Kirinzan Brewery’.

KARAKUCHI
We use locally
produced rice.
Since we brew sake that we hope local people will drink in their daily lives, we strive not only for a flawless flavor, but also for a product that is safe and healthy. From this desire, we at Kirinzan Brewery only use rice of which we know the full history – who made it, where it was made, and how it was cultivated – in all of our sake products. Because of this, it is only natural that we have continuously been involved with local rice production throughout the history of our company. Along with advancing the production of raw-material rice in cooperation with the Oku-Aga Brewer’s Rice Research Group*, which is a group composed of various local farms, we established an agricultural department at Kirinzan Brewery in 2011 (Heisei 23) that consists of professional employees who are engaged in rice production. Our goal for the future is to brewa 100% of our refined Kirinzan brand sake with locally cultivated rice. 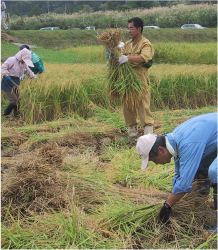 In response to calling from Kirinzan Brewery, the Oku-Aga Brewer’s Rice Research Group was established from a group of 15 farmers in 1995 with the goal of cultivating raw-material rice locally in Aga. Currently (2014, Heisei 26), 56 hectares of rice paddies are being used by 29 farmers for the cultivation of raw-material brewer’s rice (roughly equal to a harvest of 7,100 bales). As for Koshihikari, since the cultivation period and methods vary, research is conducted 7 times a year and the Niigata Prefectural Niitsu Agricultural Extension Research Center, the Aga branch of JA Niigata Mirai, and other organizations conduct training sessions while member farmers exchange information and conduct other various activities.
Protecting Water Resources
Since we brew sake that we hope local people will drink in their daily lives, it is our ideal to provide a Tanrei Karakuchi sake that people will never get tired of drinking. Therefore, the water that we use plays a very important role. Refined sake Kirinzan uses ground water from the Tokonami River which flows from the local Mikaguradake Mountain. The sprawling beech forests of the Tokonami which spread at the valley provide the perfect leaf mold soil which makes an excellent filter of the winter melted snow. However, due to economic reasons of mountain forest conservationists, replanting and thinning of the forests are no longer carried out and the natural balance of the mountain’s ecology is in danger. If the mountain is left in its current state, the quality of the current soft water*, which is ideal for the production of our sake, will change. For this reason, we at Kirinzan Brewery have taken it upon ourselves to engage in thinning, replanting, and weeding activities in this area to restore the watershed conservation functions* of the local mountain ecology and preserve our ideal water resources.
*Soft water is a type of water with a low degree of ‘hardness’ (low minerals content) that can be described as having a soft texture and being refreshing to drink. It is the best type of water for brewing Tanrei Karakuchi sake. Beech forests create an environment of plentiful fallen leaves that turn into leaf mold soil, which in turn acts as a fine filter for rain and snow waters.
*Watershed conservation functions are when rainfall or melted snow do not directly flow out of the forest, but are absorbed into the ground and slowly flow outwards. Because of this slow moving flow, the impact of floods and droughts are lessened and pure clean water is provided. This process is collectively known as the watershed conservation function.

Brand Rootst
In ancient China, it was said that a mythical Kirin ‘would appear in the world to signify the coming of a great saint’. Our company pays homage to the spirit of this legend with our brand name so that ‘those who drink this sake may be visited upon by many blessings’.